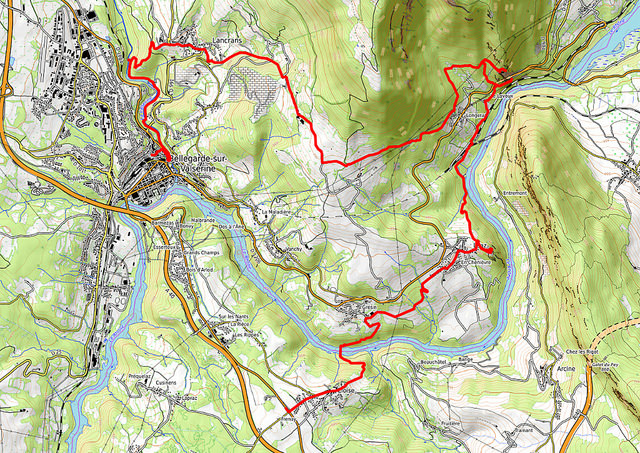 Topographic map of a hiking trail made using QGIS

Creating maps as a way to communicate data is becoming increasingly popular across and integrated into a broader set of academic disciplines. In the humanities, mapping is often used to create visual and interactive objects of  scholarship from research in subjects such as history or literature; in public health, maps can be used to show the spread or prevalence of disease. Certain mapping and geospatial data management software is prohibitively expensive, but some equally powerful open-source options have emerged, making the incorporation of mapping into research workflows more easily accessible and available. Continue reading to discover some of the most popular open-source options for geospatial data analysis and visualization.

QGIS is the most commonly used open-source GIS software package. It includes features and tools for the management, analysis, and visualization of geospatial data, including 3D modeling and over 2,700 coordinate reference system options for projecting maps. QGIS is also known for its strong community, both of users and developers. The Programming Historian has a series of mapping tutorials, including a few specfically for QGIS, that go over basics and delve into using QGIS for geocoding historical data, as well as georeferencing and creating vector layers using historic maps. The latest version, QGIS 3.4 Madeira, was recently released, and is supported on Mac, Linux, and Windows operating systems.

gvSIG Desktop is an open-source Geographic Information System that was first launched in 2004 and has been supported and updated continually since then. Users can work in a variety of formats, use raster and vector files, databases, and connect to remote services. The desktop software includes a variety of extensions and plugins: an impressive one is gvSIG 3D, which allows users to create 3D visualizations of their geospatial data out of the traditional 2D views in gvSIG. gvSIG also includes a suite of CAD tools for tracing geometries, editing vertices, and snapping and splitting lines and polygons. In addition to the desktop software, gvSIG offers gvSIG Mobile that people have used to record information such as rainfall and the management of road networks. gvSIG Desktop is supported on Mac, Linux, Windows, and Ubuntu operating systems.

GRASS (Geographic Resources Analysis Support System) is a free and open-source GIS software suite that can be used for geospatial data management and analysis, image processing, graphics and map production, spatial modeling, and visualization. GRASS GIS is used widely by academics, environmental consultants, and government agencies (NASA, NOAA, NOAA, and USGS), which can be attributed to its approachable and intuitive GUI. GRASS GIS is better known and more reliable for the analysis and processing of geospatial data and images, digital terrain manipulation, and statistical work than it is for its cartographic design functions. The software features a number of add-ons to enhance functionality for database tables, raster and vector data, and imagery; users are encouraged to develop and share new add-ons for GRASS GIS. The latest release, version 7.4, is supported on Mac, Linux, and Windows operating systems.

We selected these open-source options to share based on their rankings from GISGeography.com’s list of their 13 preferred free and open source GIS software options and the Open Source Geospatial Foundation’s (OSGeo) promotion of these options to its community.

If you have any questions about these tools, or any research data management topic, feel free to contact us.